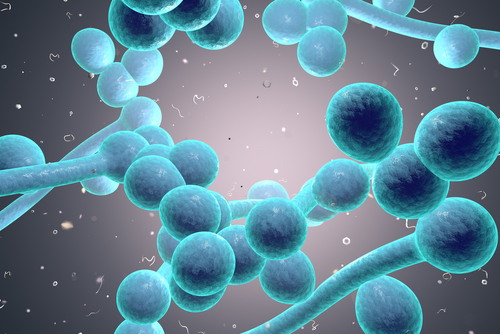 There are several different kinds of fungus that can be found in the body, but the most well-known is Candida Albicans. Candida Albicans is actually a rather common inhabitant in places like the GI tract, birth canal, mouth, skin, and lungs.  Almost 75% of women in childbearing years will have a yeast infection, but rarely will it ever enter the bloodstream.

Candida can grow in two different forms.  One is a yeast form (shaped like a sphere) where it isn’t pathogenic and the immune system ignores it.  The other form is a hyphae (shaped like a spear) where the Candida can start to puncture host cell walls.  The ability for the hyphae form to threaten a person’s own cells has been shown to set off the immune system to start attacking.  What is more problematic is that the Candida can start to take iron and zinc from a person’s own cells.  This is where someone can start to develop iron-deficiency anemia or have a zinc deficiency and the levels don’t improve with supplementation, or someone feels worse taking them (especially iron).

Some people can have Candida and have no symptoms at all, whereas another person can have a Candida overgrowth and it severely impacts their health.

The difference appears to stem from a few factors such as: 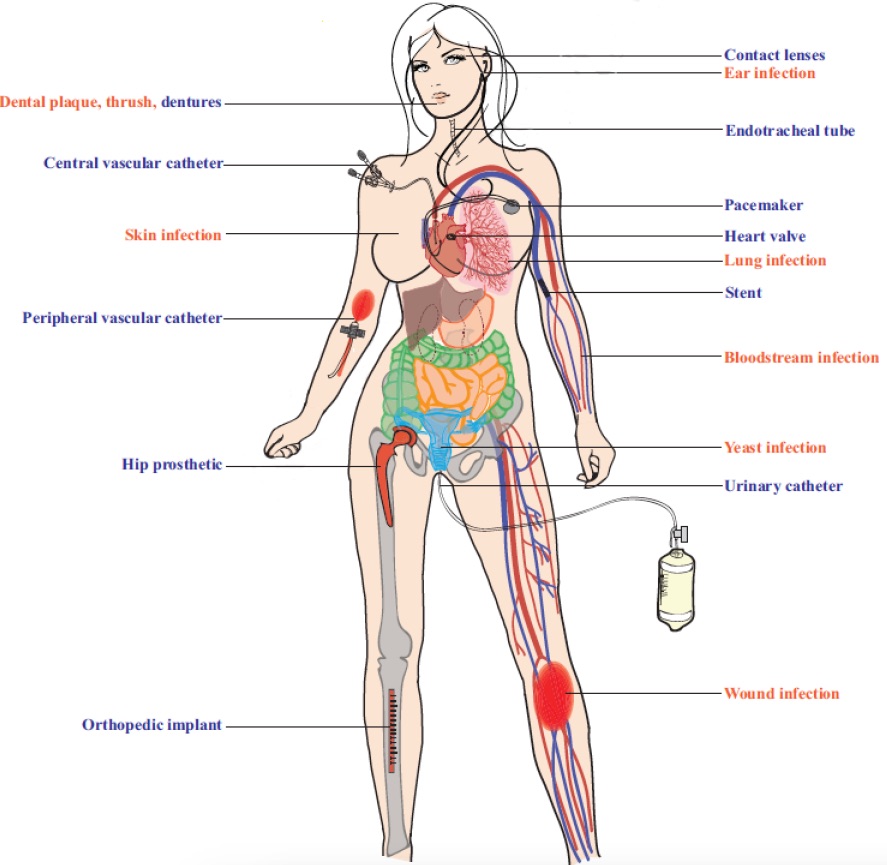 Contrary to popular belief, the majority of cases are not linked to immunocompromised people, but instead people that underwent surgery or antibiotics.  Long-term antibiotic usage leads to a disturbance in the existing bacterial microflora and can facilitate a fungal overgrowth on mucosal surfaces.  Diabetes and high estrogen levels can enhance yeast colonization due to high tissue sugar content.  Also, elevated estrogen triggers a decrease in the ability for the immune system to recognize and fight an invading pathogen.  Even though different areas can be infected, such as in the birth canal and toenails, colonization of the GI tract by Candida appears to be a requirement for these other infections.

Some circumstances that can allow a Candida overgrowth to become pathogenic are:

The body has natural defenses that are in place that act as multiple barriers of protection.  There are cells called epithelial cells which are typically the first to come in contact with a pathogen.  These cells make up things like skin, gut lining, lungs, and the birth canal and are connected by things called tight junctions (think leaky gut). Several of these types of cells secrete mucins to make a mucus layer which is another layer of protection that keeps Candida from coming into direct contact with cells in the GI tract. Another bonus is where the good bacteria in a person’s gut are supposed to live and add in another layer of protection.  Epithelial cells can also secrete antimicrobial substances, and another line of defense is stomach acid as it makes it a harsh environment for Candida to live in.  Last, but not least, if there is an infiltration of Candida through these epithelial cells, the immune system is on the lookout.  This is where a properly functioning, non-suppressed immune system comes into play.

Once the Candida have a foothold on epithelial cells they start to develop a thing called biofilm. Biofilm is like a protective barrier.  This barrier can be made in as little as 24-hours and is resistant to anti-fungal therapy and the immune system.  What is worse is that biofilm can also be a safe haven for bacteria that are some of the more prevalent human gut bacteria; i.e. – E. Coli, Klebsiella pneumonia, Enterococcous facials, bacteroides fragilis, and Clostridium perfringens.  Certain bacteria like Staphylococcus can also make Candida more problematic. 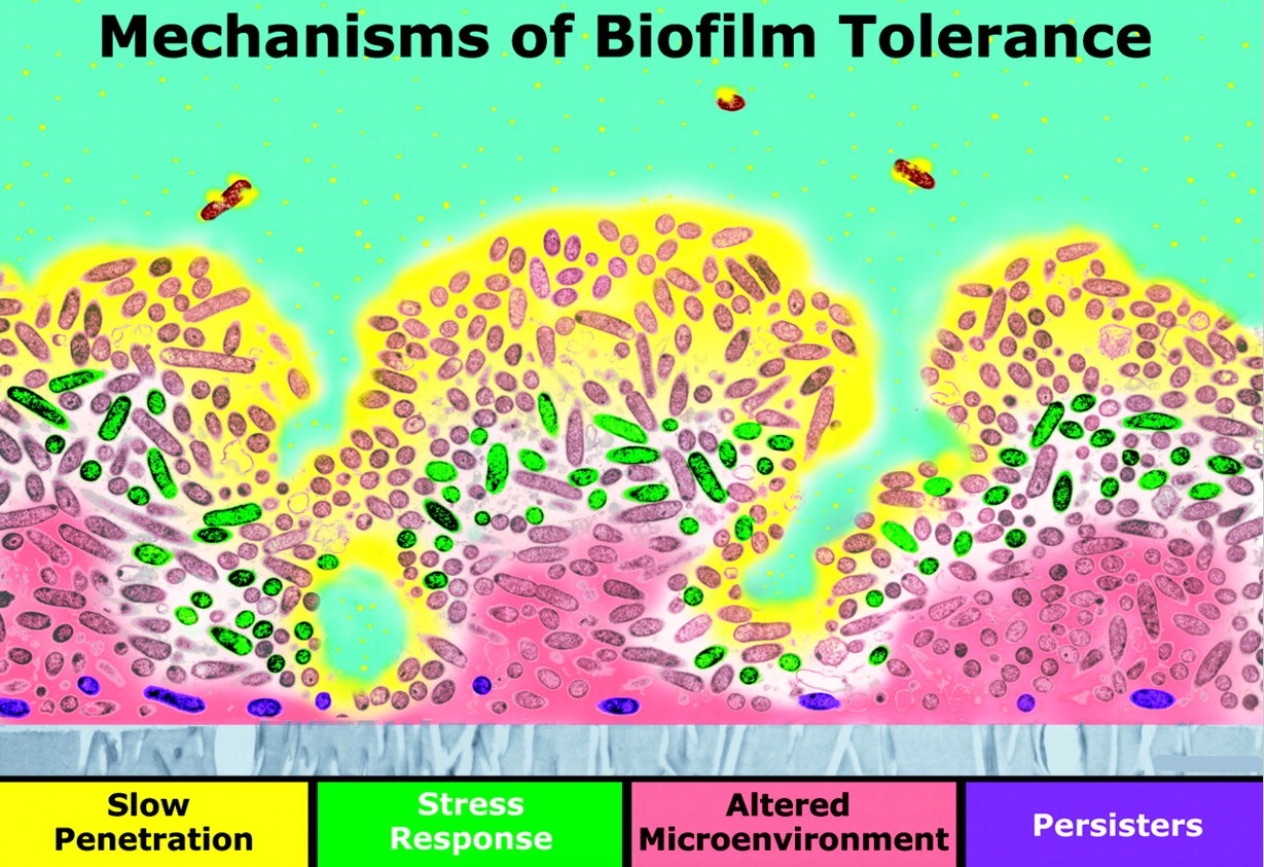 Candida and the Immune System

As if that wasn’t enough, Candida can also counteract the oxidative stress (the immune system uses Reactive Oxygen Species as weapons as well) by not only secreting enzymes like Super Oxide Dismutase (this process is done by using the zinc they steal), but they can also take glutathione from the very cells that are designed to attack them such as neutrophils. Glutathione is the body’s major antioxidant and it is common to see it depleted in cases of chronic disease.

Lastly, one of the ways that Candida can negatively impact immune system function is by promoting production of TH2 cells.  This elevation of the TH2 aspect of the immune system suppresses TH1.  TH1 is responsible for killing a fungus, virus, or bacteria, whereas TH2 gives orders on how to attack, as well as making weapons to attack a pathogen.  This relative TH2 dominance can increase the risk of developing autoimmunity in a genetically susceptible individual, especially the longer the imbalance occurs. Candida has also been shown to initiate an autoimmune response in certain diseases such as Vitiligo, antibodies to the cerebellum, as well as initiating an autoimmune response to platelets called Idiopathic Thrombocytopenic Purpura.  Candida has also been shown to aggravate Eczema, Interstitial Cystitis, Fibromyalgia/Chronic Fatigue Syndrome, and Autism.

Candida have also been shown to grow faster when exposed to hormones, as well as alter how the pituitary regulates hormones in its favor.  Estrogen is well known at increasing the rate of growth for certain pathogenic strains of Candida, but HCG has been shown to have the same effect as well.

Candida have genes that can affect a hormone called somatostatin.  In the pituitary, somatostatin suppresses the release of growth hormone (GH) and thyroid stimulating hormone (TSH).  Outside of the pituitary, somatostatin slows gastric emptying and suppresses release of stomach acid.  Gut hormones that are directly suppressed by this somatostatin release are gastrin, CCK, secretin, motilin, and vasoactive intestinal peptide (VIP). In the brain, VIP helps regulate the part of the hypothalamus that controls circadian rhythm, or the sleep/wake cycle.

Without a doubt, Candida can alter several aspects of how a person’s immune system functions, their nutrient status, as well as gut and brain health.  It is always important to properly assess how Candida and other co-infections are behaving to help determine the best way for the body to overcome such a burden through proper testing.

If you are suspecting that candida is playing a role in your health challenges, we would be happy to assess your case on a complimentary phone consultation.  You can schedule at www.myhoustonmedical.com.